The extraordinary and unique Dementia Dog project – a collaboration between Dogs for Good and Alzheimer Scotland – is to be featured as part of this year’s Channel Four Crufts TV coverage.

The project demonstrates how specially trained dogs have the power to change people’s lives for the better and the film Channel Four has compiled will go to air on Friday 9th March at 20.15 hrs on Channel Four. 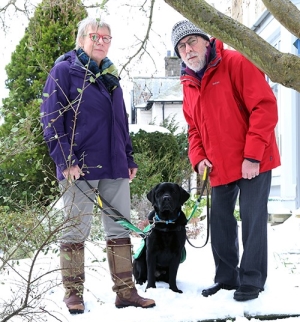 The film interviews Imke and Malcolm who have been partnered with dementia assistance dog, Webb, since November 2017.  Webb is trained to fetch medicine packs, respond to alarms and works on a dual lead which affords both Imke and Malcolm the ability to take Webb for a walk together and thus the confidence to get out and about in their community.

Funded through the National Lottery, the Dementia Dog project runs from Scottish Prison Service (SPS) Castle Huntley near Dundee and will see eight dementia assistance dogs trained to support the needs of couples where one person has early stage dementia.

What makes this project particularly special is how Webb was trained. Although he was socialised and commenced his early training at Dogs for Good’s national training centre in Banbury, he was one of three dogs initially selected to be travel to Scotland to be trained as a dementia assistance dog.  His training then was transferred to a Dogs for Good instructor, who works with students from SPS Castle Huntly, where he learnt the specific skills to support someone with dementia.

SPS Castle Huntly is an open prison and prisoners coming to the end of their sentence can choose to learn about dog welfare and training which then helps them develop life-skills and achieve qualifications as part of their rehabilitation in preparation for their return into the community.

“I never fail to be amazed by how dogs can make life-changing differences to people with physical disabilities and the dementia assistance dogs we train are just as extraordinary.  A dementia diagnosis is devastating for individuals, their partners and family members, and I’ve spoken to clients who have said that the arrival of an assistance dog in their lives brought them and their loved ones back together, creating happy memories and helping them  deal positively with all the challenges they face.”

Find out more about the Dementia Dog project

View Three men and a puppy
View Innovative partnership between Dogs for Good and Bracknell Forest showcased at Crufts
Media centre
Our website places cookies on your browser to remember your preferences and assist our marketing efforts to give you the best possible experience. Click ‘Accept All’ to consent to the use of all these cookies or click ‘Cookie Settings’ to manage them individually. Read our Privacy Policy here Read More.
Cookie SettingsAccept All
Manage consent