Emma shares how Autism Assistance Dog Briggs has made the impossible possible, not only for her son Thomas, but the whole family.

“I want to share with you a quite unremarkable trip out. My family have been staying with my parents for the Easter break, along with my brother and his family. On bank holiday Monday, ten of us went to watch the morning showing of Batman vs Superman.

We got up in the morning. We had breakfast. We all piled into the cars. We drove to the cinema. Waited in the queue. Bought snacks. Found our seats. Had to run out to the toilet half way through. Watched the (very good, but also very long) film. Got back in the car. Went home for lunch. (Pizza if you are wondering.) A lovely enjoyable morning, but surely not worth writing about?

I am being generous by saying “doesn’t like”. Autism means Thomas has literally no control over how these experiences affect him. Everything frightens him in a way that most people would struggle to comprehend. He fears anything that is not expected, which is, well, basically anything.

Now imagine how we went to the cinema. Ten of us, actually, eleven of us went to the cinema. We had an unremarkable trip because Thomas had Briggs, his assistance dog from Dogs for Good with him. Because of Briggs, we got up in the morning (with Briggs). We had breakfast (with Briggs). We all piled into the cars (with Briggs). We drove to the cinema (with Briggs). Waited in the queue (patiently, with Briggs). Bought snacks (with Briggs, even though whenever we have been to the cinema before we have always bought candy floss and this cinema didn’t sell it – it was almost an issue, but…hello Briggs, no issue). Found our seats (Briggs lying on Thomas’ feet). Had to run out to the toilet half way through (actually think Briggs was pleased to have a little leg stretch, I know I was!). Watched the (very good, but also very long) film. Got back in the car. Went home for lunch.

Briggs is our fabulous autism assistance dog from Dogs for Good. This trip – this unremarkable trip – was possible because of him. A trip to the cinema with ten of us in our pre-Briggs days (especially a cinema we have never been to before) would have required 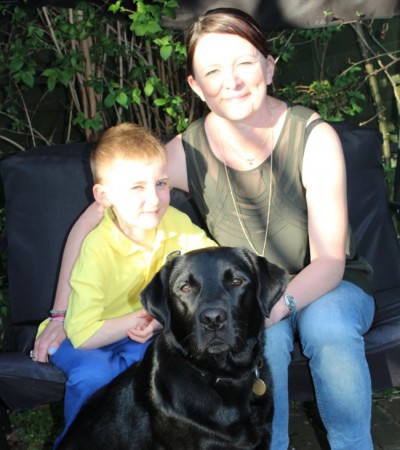 lots of planning, visual aids and ultimately worry. Would we get there? Would we last the film? What would happen after? But Briggs makes such a simple thing as trip to the cinema, just that. A trip to the cinema. An unremarkable trip. If you didn’t have child with autism, you maybe wouldn’t even mention it to your friends.

Without Briggs, we are not able to simply “go out” without lots of planning, preparation, research, and visual aids. Miraculously with Briggs, we can. I don’t know how it helps, but I know it does. Briggs has made a remarkable difference to our lives.”

View Family Dog – settling into the family
View How to Socialise a Puppy and Help Change a Life
Meet Helen, our volunteer Breeding Stock Holder