Defying the odds with life-changing Labradors 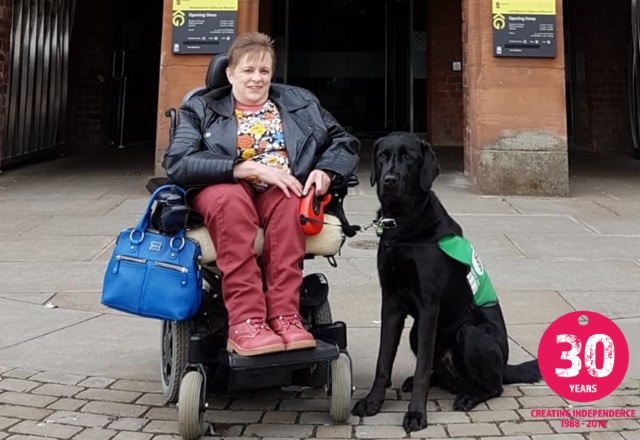 Annette has been defying the odds with her life-changing Labradors for the past 23 years.  Her parents were told when she was a baby that she wouldn’t live past the age of five, then that she wouldn’t finish school, then that she’d not make her late 40s… She’s now in her 50s, has two grown-up children, five grandchildren and isn’t planning on going anywhere anytime soon.

“I was born with a benign tumour on my coccyx which is a common in-vitro tumour in babies.  Unfortunately, due to a lack of medical understanding in the 60s, it wasn’t removed early enough and I was left a paraplegic because of the devastating damage the tumour had caused to my spinal cord,” explains Annette.

Annette has combatted many related illnesses during her life and thus, has spent a good deal of her time in a medical environment.  “During one hospital visit in 1995, I was sat in the waiting room and opened up one of the magazines on the table.  It carried a feature on Dogs for the Disabled – now Dogs for Good – and the more I read, the more impatient I became to get home and make a phone call!” she recalls.

Because the charity was so small at the time and it takes a good two years for a dog to be socialised and then trained to become an assistance dog, Annette had to wait patiently before she was matched with a dog.  “I was visited a couple of times by Dogs for Good trainers who came to assess the house and also understand my disability and then, on the third visit, they came with a couple of dogs so I could see them ‘in action’.  I remember us taking them for a walk and both were a delight but one of them, Monty, was definitely more tuned into me. It was definitely worth the wait.”

Needless to say, Monty and Annette were a perfect match and he assisted her meticulously for many years.  “We quickly developed a truly unbreakable bond and he never, ever left my side.” A demonstration of Monty’s devotion came in 2003 – five years into their partnership.  Annette and her husband were away for the night, staying in a large hotel.  During the night, a fire broke out and the lifts were rendered unusable.  Annette’s husband went off to find out the location of the safe rescue point for her to wait for help.  “He asked the manager and was then bundled out of the building and told he wasn’t allowed back upstairs,” says Annette.  “He was beside himself, but the firefighters assured him that they were going to get me out.”

However, the fire worsened and help still hadn’t come, so Annette decided to get on her bottom and shuffle down the stairs.  Lots of other people were also thinking the same thing and she was very vulnerable to being knocked in the rush.  “Monty pushed me up against the wall and put his body between me and others hurrying down the stairs.  He went with me slowly, step by step, for four flights. It wasn’t something he’d been trained to do – it was him, instinctively working out a solution to keep me safe.”

When they got out into the car park, Annette and Monty were made comfortable and the firefighters hailed Monty a hero.  “My husband was overwhelmed and Monty was absolutely exhausted,” remembers Annette.  “The firemen let Monty into the cab of the fire engine and he conked out and slept there for an hour!”

When Monty passed in 2009, Annette was heartbroken and said she couldn’t do it again but after a while, she started to think differently.  “Monty had started something and I began to feel that while nothing would ever replace him, perhaps a successor dog would be an honour in his memory and would continue what he’d begun.”

With big shoes to fill, black Labrador, Uno, a.k.a. ‘Boof’ went to join Annette in November 2009.  Annette laughs as she explains that “he’s a bit of a clumsy soul, our Boof, but we adore him…” 100% pure Labrador, Uno certainly continued “in his own inimitable style,” where Monty had left off.  He retired after eight years in late 2017 but still lives with Annette and her husband and is a steadying influence on Annette’s newest 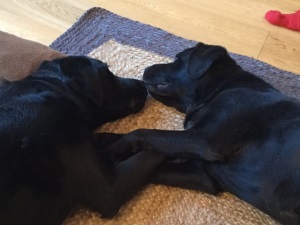 “Horace is an absolute giant of a dog,” laughs Annette.  “Uno can actually walk underneath his tummy without too much bending.  He’s the polar opposite of Uno; in fact, he’s quite like Monty in many ways.  He’s young and still learning my ways but he’s really quick on the uptake and eager to help.  It took me 10 minutes to get him to ‘speak’ and two, five-minute sessions to get him to put rubbish in the bin.  If this is what he can do now, the future’s going to be great!”

Uno and Horace are great friends and regularly snuggle up together.

Annette explains that what her dogs have done for her is not only practical in terms of support, but also emotional.  “I don’t sleep well and lie awake most nights.  The world is a lonely place at that time and often I get a bit fed up.  My husband is amazing but he needs to sleep so I don’t disturb him and this is when my wonderful dogs help the most.  Horace will gently put his paws on the bed and make his way up to me and it’s so comforting and soothing, having that great big furry, devoted presence beside you.”

Having her dogs has also been enriching for her family and takes a lot of the day to day frustration out of life for all of them.  “Large care stuff is generally routine,” explains Annette.  “But dropping a pen 15 times in a few minutes is almost like a form of torture and it’s those little things that can break people.  My dogs see those things as a game; something they enjoy doing.”

Annette’s seen changes in the charity in the 23 years she’s been associated with them but one thing remains constant.  “The support I get from staff and trainers is now and has always been phenomenal and feels very individual, almost ‘family-like’.  The partnership is definitely more than the dog and I’m so pleased I picked up that magazine in 1995.”

View How can dogs help in the community?
View How to donate to charity for free!
Meet Helen, our volunteer Breeding Stock Holder