Caring for puppies – a rewarding way to volunteer 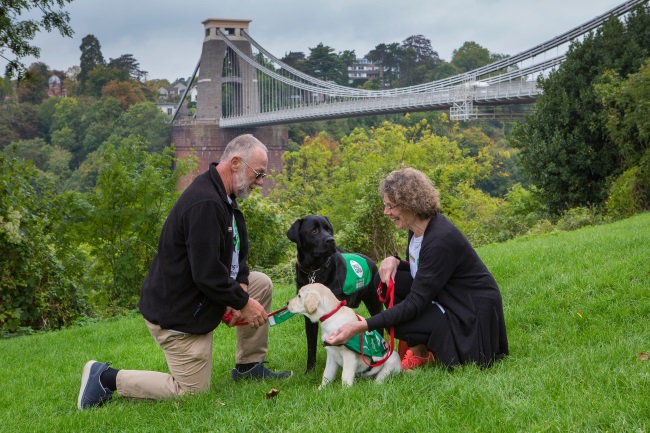 “Popping out to post a letter or get a pint of milk isn’t something we can do any more…well-trained, happy puppies are thoroughly irresistible to passers-by and it’s almost impossible to go anywhere quickly! We do make a lot of new friends though,” laughs Sue who, along with husband Mike, is a valued Puppy Socialiser volunteer for Dogs for Good.  And it seems the couple are well and truly hooked on puppies as they’re now on their seventh; a yellow Labrador retriever cross, Darley.

Caring for puppies – how it began

They also have a three year-old black Labrador called Norton living with them permanently who accompanies Dogs for Good training staff on home visits in the area.  “He’s endlessly patient with Darley,” says Sue.  “And he’s so gentle with her when she’s won’t leave him alone; he’ll run and get a toy to distract her.”

Their puppy socialising story started in 2010, a little while after their much-loved pet dog passed after 17 happy years together. Sue and Mike took the decision to take a canine break, but very shortly the absence of a dog became something they felt keenly.

“One day, we were at our local farm shop and happened to see a notice up on the board saying that Dogs for Good were recruiting for socialisers in the Bristol area. We got on the phone as soon as we got home.  We were delighted to learn we were perfect candidates and within a month we had our first pup!”

Over the years, Sue and Mike have had a mixture of boys, girls and breeds including curly coated retrievers, golden retrievers and black and yellow Labs.  “They’ve all been equally gorgeous but each one has been different to the other in terms of personality and quickness to learn,” says Sue.

A fun and rewarding way to volunteer

There have been many comical moments, too.  Sue remembers being in a supermarket with their second puppy, Brooke.  “A lady came up and asked if her husband, a wheelchair user, could say hello to Brooke.  Of course, we said yes and asked Brooke to ‘sit’.  She was so enthusiastic to meet the gentleman that while she remained sitting, her tail was wagging so much, she managed to sweep the bottom shelf she was sat in front almost clear of products!”

Sue, Mike and their four-legged charges attract attention wherever they go and the pups are now mini-celebrities around the area.  “They’re well-known in all the shops, supermarkets and doctors’ surgeries – everyone seems to know us and stops and says ‘hello’!”

The couple thoroughly recommend puppy socialising as a fun, unique and rewarding way to volunteer.  “Anyone who stops and starts to chat – which means pretty much everyone – is given the full Dogs for Good story,” explains Sue.  “It never fails to move and inspire people and  I know for a fact that a few people we’ve chatted to have gone on to fill out the puppy socialising application forms or get involved in some way with the charity.” 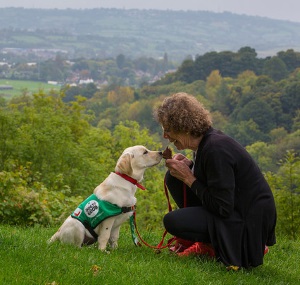 A question that is always asked of Sue and Mike is, ‘How can you say goodbye?’ and Sue is, as always, honest in her reply.  “Of course there are tears – you’d be a robot if saying goodbye wasn’t hard.

“But then you remember that the puppy is going on to a loving home that is waiting with open arms and will become a life-changing addition to a family with a child with autism or an adult with a disability, the tears dry up and a sense of quiet pride replaces any sorrow.

“We have also put our own measures in place and try to ensure that we’ve got our next puppy lined up to arrive a couple of weeks before the current one leaves or very shortly afterwards.  It works like a charm,” she grins.

Caring for puppies and making a difference

The couple also have contact with some of the families that their puppies have gone onto become assistance dogs for.  “When we hear first-hand from the new owner how and why the dog has transformed their life, it fills us with great happiness. We give ourselves a little pat on the back and say to each other ‘we helped to make that difference’.  Not only that, but we had huge fun along the way!”

Find out more about puppy socialising in Bristol.