Dealing with unwanted behaviours in a puppy: Barking

If you’ve recently seen puppy Digby on This Morning, you may have also seen that he’s been rather ‘chatty’ while he’s on screen.  Obviously Digby is still a puppy, and just like young children, he’s learning about the world around him and what gets a reaction from people.

Why do dogs bark? 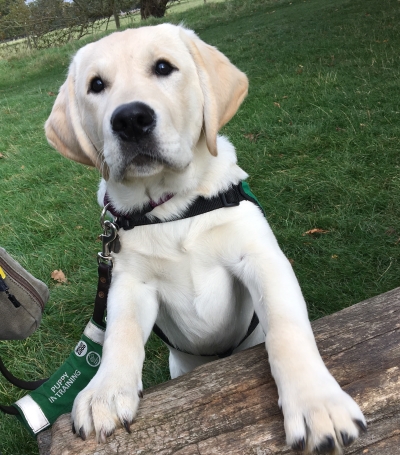 For a dog, barking is a way of communicating and dogs bark for different reasons.  Digby’s bark when he’s on set is a mixture of attention seeking and being separated from his puppy socialiser who’s behind the cameras.

Therefore we need Digby to learn that he’s not going to get rewarded for the barks, nor is his Puppy Socialiser going to return to him when barking. Instead he’ll get rewarded when he doesn’t bark, and when he’s quiet, the reward – his puppy socialiser, will return back to him.

There are several things that we’re working with Digby on at the moment to re direct and change this behaviour:

Digby’s still a young pup and his socialiser Helen is never far away from him when he’s on set at This Morning.  He’s obviously forming a strong bond with Helen and wants to be with her, but learning to settle is an important skill for any puppy, and we’re confident that with consistent training Digby will soon start to learn that a few woofs won’t get him anywhere.

View Meet the Dogs for Good Team: Alli
View Preparing your dog for Bonfire Night
Lorraine Kelly launches campaign showing why we should ‘Paws to Talk’