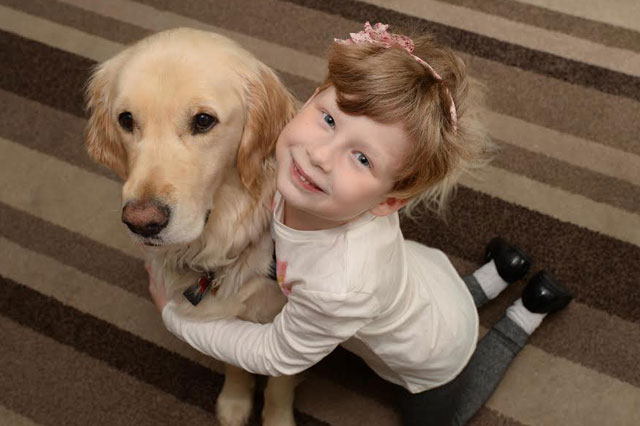 Most people understand that bringing up a child with autism is challenging. But for Teresa Fletcher, who lives in Nuneaton, home became a virtual prison.

“Beth, who is now seven, doesn’t walk. She pulls your arms, she jumps about, and worst of all, she runs into the road even when there’s oncoming traffic because she has no fear,” she explains. “In the end, I felt it was too difficult to go out with her and would leave my husband Steve and son Jack to go out without us.”

Going out in the car wasn’t much better. “We’d get out of the car and if there was any kind of crowd, Beth would go into complete meltdown because she was so overwhelmed. She couldn’t stand noise either. One time, I took her into town and there was a Chinese dragon show, with drums. She just stood still, covered her ears and screamed, hitting out when we tried to calm or move her. Everyone was looking at us.”

Such meltdowns happened a lot, says Teresa. “She’d do it in the supermarket, restaurant, you name it. She would also hum loudly or jump up and down flapping her arms, in a trance-like world of her own. We’d just have to abandon the shopping trip or meal and head straight home.”

Often, people would make hurtful comments, saying things like “That child needs discipline”. “I even bought Beth a T-shirt which said ‘I’m not naughty, I’m autistic’. But why should I have to label my child?” says Teresa.
One day though, literally everything changed. At a National Autistic Society event, Teresa heard about Dogs for the Disabled‘s Autism Assistance Dog scheme. “I loved dogs and started to wonder if having one might have a calming effect on Beth. I also liked the idea of these dogs’ special training to give confidence and security to both parent and child when out and about.”

Having been successful in their application, a gorgeous 18-month-old Golden Retriever Quartz was matched with Beth when she was five. “Beth loved him from the moment he arrived. I watched her and her brother playing hide and seek with him in the garden, with Beth giggling in a way I’d never seen before.

“They quickly built up a bond and it’s as if she now feels there’s someone there just for her. Quartz is absolutely her best friend and they have an understanding between them that is quite incredible. She’s happier than ever with him around.”

That was just the start. Whilst Quartz is like any other family dog in the home, the moment Teresa puts on his blue jacket, with the words “Autism Assistance Dog” on it, he knows he’s in work mode.
“Beth puts on her belt which attaches to the dog’s jacket via a lead. Beth also holds a handle to the jacket, which enables her to walk right next to him, skipping and jumping as much as she wants because he is trained to keep her away from the road.

“When we get to the curb or traffic lights, I give Quartz a command to sit and she can’t move him until I give another command for him to move on. I now know she is completely safe when we’re out and about.” 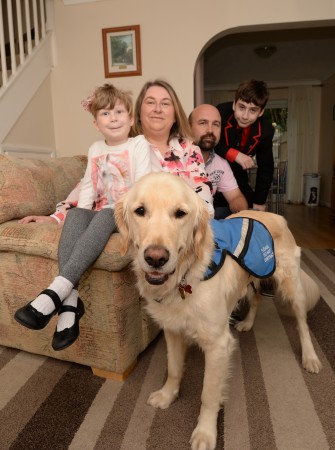 As an assistance dog, Quartz also has access to public places like shops, libraries and restaurants. “Now we can go shopping, out for a meal – anywhere. As long as Quartz is beside Beth, she’s content to go with the family. He’s given us a whole new lease of life.”

Quartz is also trained to do what’s called a ‘head rest’. “So if Beth gets overwhelmed, by rain or crowds for example, and starts jumping up and down or rocking back and forth and humming, I give Quartz a command and he rests his head on her lap, which immediately calms her down.”

Even just stroking Quartz is reassuring for Beth, keeping her calmer in stressful situations. “In fact, I can hardly believe the world it has opened up to us. I can stand in queues for the first time ever, for example. Beth just plays nicely with Quartz’s ears. The fact that Beth has Quartz with her has also made people more understanding. People get that she needs extra help and support and have therefore been less critical.”

Teresa thinks it’s made the rest of the family calmer too. “Before Quartz arrived, we were tense and on edge, always alert for what might trigger the next outburst. Now, it’s not like that. In fact, Beth will spend a whole half hour grooming Quartz. Nothing could engage her for so long before he came.”

There’s been a noticeable reduction in Beth’s repetitive behaviours too, all of which are stress related, says Teresa.

“The transformation in our lives is just staggering.” She concludes. “I’d become virtually house-bound with Beth and life was a nightmare.

“Now, I feel we can do so much and it’s such a joy seeing Beth so happy.”

Please help us make a difference

You can make a difference this World Autism Awareness Day. We receive no government funding so any and all donations will make a huge difference:

A version of this article first appeared on Parentdish.