Can a dog help improve confidence? 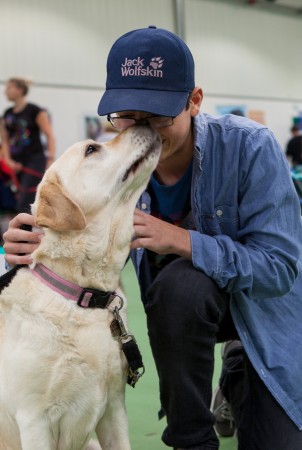 Some of our most recent projects explore how dogs can help to make a difference to people in just a few short sessions, the latest of which has been an eight week pilot project in collaboration with the Child Brain Injury Trust.  This is the story of how we worked with Jack, a teenager who had an acquired brain injury and who we wanted to partner with a dog to see if we could help improve his confidence.

Each week Jack met with a member of our Community Dog team and Daisy, a yellow Labrador who is being trained by Dogs for Good.  Daisy and Jack proved to be a great match, he loved her cheeky personality. Jack’s role was to help Daisy to get more used to working in busy environments so that she can help other people in the future.  Daisy needed lots of encouragement when she went out and Jack did a great job: supporting Daisy while they were walking around the town, visiting the retail park and going into shops and cafes so that Daisy got used to working in busy places.

Meanwhile Jack bought sweets, enquired about a computer game he couldn’t find on the shelves; talked to people he met about Daisy and even did a talk at his school in front of the whole class.  Each session helped Jack to become calmer and more relaxed in different environments. He even came to our Fun day, a crowded event he wouldn’t even have considered if it wasn’t for Daisy. On top of that he entered her into a dog show where they won 3rd place at the fastest wagging tail competition.

Jack also became happier to go to school, where he loved to talk about his new four-legged friend. Even his school work seemed to improve! Both the teachers and his parents noticed he increased his confidence in busy places and he was more comfortable to talk to people he was not familiar with. Daisy showed him he can do it and when she is not with him anymore, he imagines her by his side. 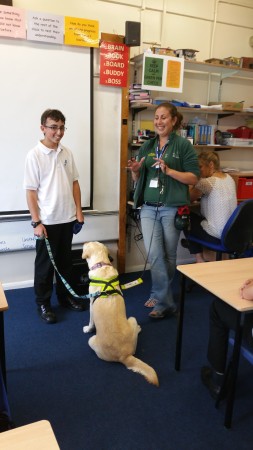 Despite the fact that Jack clearly did very well, he was sad to say good-bye to Daisy; but he said Daisy is now ready to help many more people. And we certainly feel she is too! Thanks to the wonderful job that Jack did, both dog and human have a new found confidence that will prove to be a useful skill in their future lives.

View A new name and identity for Dogs for the Disabled
View Could assistance dogs help people with autism get into work?
Lorraine Kelly launches campaign showing why we should ‘Paws to Talk’