A small dog with a big heart 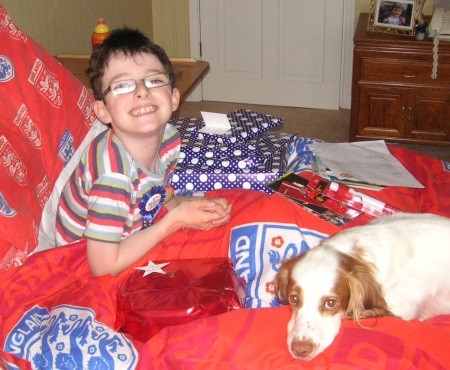 “I love Vito – he’s like my special brother. He gives me lots of nice cuddles. He’s one in a million”

Because of his disability, Thomas faces challenges every single day. Having cerebral palsy means he has a huge amount of difficulty balancing and can only manage to walk short distances. Doing the simplest of things involving balance, stretching or bending can be difficult and painful.

His mum Lisa struggled to motivate him to even leave the house. On the rare occasions she succeeded in getting him out, he’d avoid all eye contact with people and wouldn’t talk to anyone.

Lisa says: “As a parent it was just heart-breaking to see my son so depressed and withdrawn. I knew I had to do something and I turned to Dogs for Good. We had started along the path that would lead us to Vito!”

Early this year, Thomas had two operations involving no less than 16 different procedures. During a physiotherapy session, the pain and discomfort became just too overwhelming and Thomas collapsed in agony and distress. Within seconds Cocker Spaniel Vito was at his side, snuggling, soothing and calming him while gradually the pain receded. Vito knows instinctively 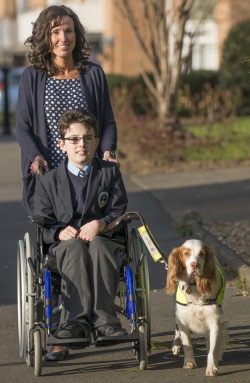 when Thomas needs him – every time.

Vito’s help extends beyond this vital emotional support – he can pick up the things that Thomas has dropped, fetch items that are out of reach and help him with pulling his clothes on and off, something Tom once found incredibly difficult. And just for good measure, he’s also happy to help Lisa fill and empty the washing machine and pass her pegs out of the basket.

Lisa says, “We’re so lucky to have Vito. He’s so loving and caring and gives Thomas someone else to talk to and relate to. He also helps us as parents, giving us some relief and a positive focus”.

Lisa knows that all the tasks that Vito has been trained to do will help Thomas more and more as he gets older and wants more independence.

As you can imagine, Thomas will face many more difficult and painful challenges but thanks to Vito, he now looks ahead to his future with a new optimism. That is the difference that a small dog with a very big heart can make.

You can watch Thomas and Vito in action in this BBC Look North film.