How dogs can rebuild lives

Injuries sustained in a devastating car accident in December 2002, saw former plumber, Dan, left a T1 complete paraplegic at the age of 24 and his life was changed in an instant. However, Dan has experienced how dogs can rebuild lives. 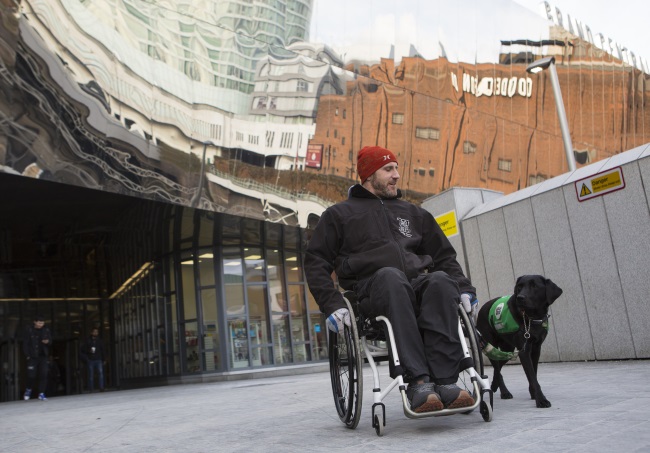 Dan spent the six months recuperating in hospital after his accident, before going to live with his parents. In September 2003, Dan got his own place about four miles away. “Living alone for the first time since the accident was quite lonely so in early 2004, I decided I’d get a dog,” he says.  “I went to my local rescue centre and found Chad; part collie, part Jack Russell. He was an amazing dog.”

Having Chad had a big impact on Dan’s day to day routine.  “He gave me a very real sense of responsibility – at the very least I had to get up to take him out for a walk every day and had to make sure he had food and water.”

Despite Chad not being trained to do anything other than the usual sit and stay, he totally surprised Dan one day. “I heard the post come through the door and jokingly said to Chad ‘go get the post for me’.  I nearly fell out of my wheelchair when he went trotting off and brought it back!”

Tragically, Chad developed a tumour on his nose which then spread into his mouth and Dan had to make the heart-breaking decision to put him to sleep.  “I had nearly two years with him and life without him was horrible.” says Dan.

Prior to Chad’s passing, Dan had met a lady who had Dogs for Good assistance dog, Magic. “It made sense to have another dog so I chatted to Magic’s owner and found out more about Dogs for Good, went home and applied for an assistance dog. I knew there’d be a long wait so just carried on, hoping something would happen sooner rather than later.”

While on the waiting list, Dan started playing wheelchair basketball and turned out to be a natural at it.  “I’m really competitive and I love that side of the sport as well as the social interaction,” he explains. “I started playing in 2006 and I still go every Tuesday, Thursday and Saturday and go to games on Sundays.  I am also now the under-15 regional head coach – something I’m really proud of.”

In 2008, Dan was contacted by Dogs for Good to arrange an assessment. “So, along came one of the trainers with a small, black, female Lab called Vesta.”  The assessment went very well and Dan was asked there and then if he’d like to train with Vesta at the Dogs for Good centre with the intention of her becoming his dog.  “I didn’t need asking twice!” he laughs.

“We bonded really quickly and I soon realised why she was dubbed the ‘100 mile an hour dog’,” remembers Dan.  “She really was quick and pretty much perfect for me in every way and she definitely dragged me out of my shell a bit.”

Once at home with Dan, ‘100 mile an hour’ Vesta calmed right down and the bond between her and Dan deepened.  “She also worked her magic on my mum who fell in love with her from the instant they met.  Mum was over the moon that firstly, I had this brilliant companion and secondly, when she saw how much task-work Vesta could help me with at home as well as out and about she was stunned.  It’s one thing hearing people talk about what these dogs can do, it’s another thing to see it in action.”

After eight and a half years together, Vesta developed a tumour on her neck which was operated on but it grew back bigger, harder and faster. “Having her put to sleep was utterly devastating – worse than the accident, worse than being in a wheelchair, worse than anything.  My heart was well and truly broken,” says Dan.  “I didn’t want to apply for a successor dog – I just needed to get away.”

Dan went on holiday to see his uncle in America for three weeks and while there, got a text from Dogs for Good asking if he’d contact them when he got back to arrange a meeting as they wanted to update their records and see if his needs had changed – just in case he wanted to apply for a successor dog in the future.

“Sneaky.  Really sneaky!” laughs Dan. “The Dogs for Good training team knew I was grieving for Vesta still and they understood and respected that.  But, what I didn’t know is that they had another fantastic dog for me and needed me to meet her without actually voicing those words.

“This is a good example of the relationship I have with the trainers and staff at Dogs for Good – they have taken the time to get to know me and knew that if they’d said ‘we’ve got this dog we’d like you to meet’, I’d have probably resisted.”

So, when he got home, the Dogs for Good team visited Dan at his home.  While he was chatting to one of the trainers, he felt paws land lightly on the back of his shoulders. “Jazz had been brought in and came trotting round to the front of me and we said hello to each other.  The trainers asked if I’d like to take her for a little walk and… well, that was that really. A day later, I got the call asking if I’d like to train with Jazz and if that went OK, would I like her as my dog…  I said yes; of course I said yes!” he says.

“All my friends and family are besotted with Jazz and she’s sociable with everyone – that said, she’s very much my dog. She might be getting fuss from someone else but she’s always got her mind on me.

“She’s got a really expressive face and she’s also really chatty.  She ‘talks’ to me in the morning to get me up and if that doesn’t work, I’ll get a paw in the face or a nose in the eye… She makes me laugh every single day and to me, she’s priceless.”